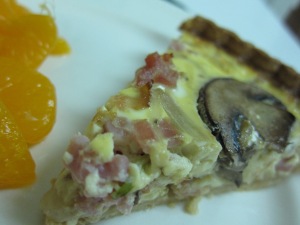 subtitled, “A Guidebook to All That Is Truly Masculine.”  It was a spoof, of course, which satirized stereotypes of masculinity.  According to Feirstein’s humorous look at the expected roles of the sexes, a man who eats quiche is a follower of fashion, one who actually cares about how he looks and what other people think.  Real men would eat eggs and bacon by the platefuls, belching loudly upon completion, and would definitely steer clear of anything with a French name.  Reading about this book brings to mind a story about pumping gas, real masculinity, respecting women, and loving quiche.

My husband and I raised two boys, both grown now, both of whose faces still light up when quiche is served.  We raised them to be fiercely independent, a choice of ours that has become both a blessing and a curse at times, although we have always known it was the right thing to do.  One Saturday about six years ago, my younger son (who was probably 17 at the time), and I pulled into a gas station.  I promptly got out of the car and began pumping gas.  Picture this – a very rotund man, wild-haired, free of the majority of his teeth, spitting tobacco, and sporting a wife-beater tee shirt, says to me in an angry voice, “..at boy oughta get outta … that car and pump (th)at gas!!”  Presumably, he was prepared to tell me a few things about raising a real man.  I looked at him curiously.  I am perfectly capable, I thought to myself, of pumping my own gas.  I am not a weak woman, unable to perform simple tasks.  I enjoy having men in my life, but thankfully I do not depend on them for survival.  All of this I kept to myself, of course, for these days such a response might have one staring down the barrel of a sawed-off shotgun.  At that point I got in the car and thanked God that not only am I an able, strong woman, but my husband and I together raised able, strong boys who credit women for their abilities and strengths as well, two boys who respect the unique capabilities and talents of every person, including women.

Feirstein eventually makes the point that real men do a lot of “unmanly” things that stereotypes have kept them from admitting.  In fact, those men in touch with their feminine sides are more secure and manly that those who are not.  And real men do eat quiche.  I am madly in love with three of them.

Pierce crusts with a fork a few times and bake at 400 degrees for 10 minutes.  Reduce oven temperature to 350 degrees.  Chop raw bacon, with a knife or kitchen shearers, into a pan and cook. Remove bacon pieces and set aside.  Discard all but two tablespoons of the bacon grease.  Sauté chopped onion and mushrooms in hot drippings 5 minutes or until tender.  Stir together bacon, onion mixture, half-and-half, and next 4 ingredients in a large bowl.  Pour mixture evenly into the two crusts.  Bake at 350 degrees for 45 to 50 minutes or until a wooden pick inserted in center comes out clean.  Let stand 10 minutes before serving.